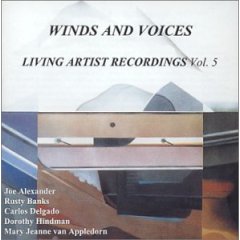 “The best of the five works on the Birmingham Art Music Alliance program came from the husband and wife team of Charles Norman Mason and Dorothy Hindman. … Hindman brought David Smith’s nostalgic poetry to life in “Three Songs of Reminiscence.” Hints of tango rhythms in “American Plantagenet” provided ironic contrast to the story of an itinerant preacher. The tale of a double suicide drowning in 1946 was poignantly rendered by tenor James Blanton and pianist Arielle Levioff. Smith’s appearance with Birmingham’s Three Tenors was remembered in the delightful opera parody, “Aria,” which ends on a hearty high note with “Tenorissimo.” Goliard’s Blanton provided the grandstanding.”
~Michael Huebner, “ASO’s Pandolfi to solo on Mozart Horn Concerto No. 4,” The Birmingham News, Sunday, October 19, 2003

Foremost was Dorothy Hindman’s superbly crafted Songs of Reminiscence, premiered last year at Birmingham-Southern College by tenor David Smith. Author of the texts, Smith sang in this performance with accompaniment by pianist Kevin Grigsby. Lively, engaging and bursting with bravura, the cycle will find itself much in demand once word spreads.”
~Nancy Raabe. “Warmth, enthusiasm flow at BAMA concert,” The Birmingham News, January 27, 1999

The texts resulted from my sabbatical leave project, spring, 1997, which included the study and writing of poetry. They are from a series based on remembrances of my family in California and on personal reminiscence. The first, American Plantagenet, is a characterization of my stern circuit-riding preacher-grandfather who established a number of churches in the mother lode gold rush area of northern California in the early part of this century. The second, Moss Beach, 1946, is the true story of a double suicide by drowning witnessed by my grandfather as told to my father. The third, Aria, is a whimsical piece freely based on my experience singing in the Birmingham’s Three Tenors concert this past February.

Dr. Hindman’s settings of these texts are rich and compelling. They undergird and enhance the emotional content of the words.  Her musical language is rooted in the 20th century, but in these songs she makes use of extended tonality, paying homage to the traditional styles of art song, opera and operetta. These settings are easily accessible to the average music lover, and I look forward to presenting them to the Birmingham community.