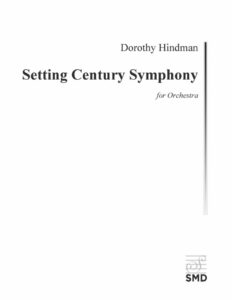 “The rhythm of the dance formed the unifying musical ground in works by Beethoven, Dorothy Hindman and Roberto Sierra at the Frost Symphony Orchestra’s concert on Saturday night. … Hindman’s three-movement suite is ingeniously crafted. The score is an imaginative essay in orchestral rhythm and color. The initial section “Ticking” is based on a brief, repeated figure in the violins, like the machinery of a clock. Gradually larger melodic threads emerge. The piano imitates bells over long string lines in “Tolling.” As the winds and strings branch out to broader, more complex patterns, the overall effect is powerful. Dance-like themes give the entire orchestra a good workout in “Streaming,”. An extended episode for winds exploits the individual instruments’ timbres in striking fashion. Hindman could not have wished for a better performance, with Magalong keeping the ensemble playing tight and crisp.”

Setting Century is a symphony in three movements, originally written as a suite for Pierrot ensemble in the summer of 1999, just before and after my father’s death from complications after surgery for lung cancer. The orchestral transcription and expansion was made in 2003 and extensively revised in 2015-16 for the premiere in October 2016.

Each movement explores different musical and psychological treatments of time and emotion. Tickingis agitato, juxtaposing real time against dream states. Melodic fragments of varying emotional content interrupt the steady, relentless ticking of the violin. Tollingdilates the ticking of the first movement into slow, pealing bells marking the passage of time. The eternal melody of life in the strings is complemented with exhalations in the winds. Streamingexamines the fleetness and inexorability of time, binding us all to the shared countdown that measures our lives. Syncopated unisons phase into close canons and back to unison throughout, as some moments in our lives can seem longer than others.

Setting Century was made possible in part by an individual artist fellowship from the Alabama State Council on the Arts, and is dedicated to the memory of William Murphy Hindman.