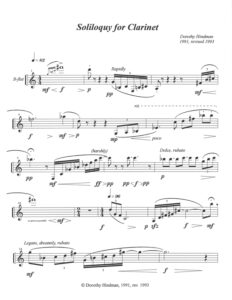 Soliloquy for Clarinet (1991, rev. 1993) is one in a series of solo pieces by the composer modeled formally upon the dramatic soliloquy. These works employ ideas which recur throughout the piece as though in conflict, sometimes resolving at the close, and other times remaining unresolved, suggesting a continuing drama. The Soliloquy for Clarinet explores a main idea, which is treated to continuous development, by turns lyrical, then angular. Secondary ideas interplay with the first, until a truncated restatement of the original idea brings closure to the conflict.