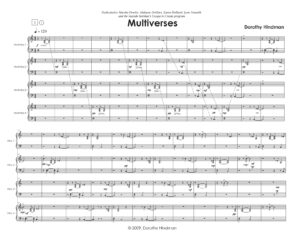 Multiverses (2009) for marimba solo and Max/MSP was written for Scott Deal and the Telematic Collective, to exploit the possibilities of telematic performance, Internet performance featuring geographically separate ensemble members.  It can be performed as a solo work, a telematic duo (or larger ensemble), or an acoustic quartet (together or telematically). This is the acoustic quartet version.

The multiverse is the hypothetical set of multiple possible universes (including our universe) that together comprise all of reality.  The idea of parallel universes corresponds to the concept of the multiverse.  (~Wikipedia)

The core idea of this work plays on the idea of the echo – distance, natural decay, and durational expectations – and then fulfills or denies those expectations.  The idea of using various echoes came from considering the issues of latency that are embedded in telematic performance.

The intention with these unusual echoes, and with the possibility of telematic ensemble performance, is to create a musical environment that will give the listener a view into the multiverse: multiple versions of a single performer, performing the same work in an infinite number of universes, set apart by milliseconds and distance.

Multiverses was made possible by a Seaside Institute Escape to Create residency, and is dedicated to the Insitute’s amazing personnel and volunteers: Marsha Dowler, Malayne DeMars, Karen Holland, Lynn Nesmith, and Nancy Holmes.