Prothalamia: A Celebration of Marriage for All 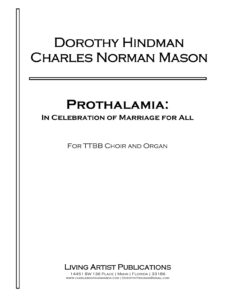 Prothalamia: A Celebration of Marriage for All

“If you love classical music, if you wish to be taken in by new music which is varied, utterly rich and sung with purpose and heart, you will love Prothalamia. … [Hindman’s] Credo is based on an excerpts from Walt Whitman’s Song of Myself, 1856. It is the highlight of the work for me, so rich it should become the It wedding song for straight and gay people … Finally, there is [Hindman’s] Agnus Dei, consisting of a text by the Roman writer Marital, Epigrammata 12.42 ca. C.E. 101 which brings us back to reality as we depart the exploration of marriage equality in music. The text speaks for itself:
The bearded Callistratus married the rugged Afer Under the same law by which a woman takes a husband. Torches were carried before him, a bridal veil covered his face, Nor was the hymn to you, O god of marriage, omitted A dowry was even agreed on. Does this not, Rome, seem Enough?
As Agnus Dei brings us back to the reality of today, it hopefully draws people into a meaningful conversation about marriage and what it means to individuals and to society. Because marriage equality has not been reflected upon in music, Prothalamia should expand and deepen the form and substance of the larger national debate with the polemical volume turned down and the atmosphere of appreciation turned up.”
~Elizabeth Donoghue, “A Musical Interpretation of Same Sex Marriage,” The Huffington Post, May 16, 2010

Prothalamia: In Celebration of Marriage Equality (2010) was commissioned by, composed for, and dedicated to the Empire City Men’s Chorus by composers Charles Norman Mason (b. 1955) and Dorothy Hindman (b. 1966). The piece was conceived by artistic director Christopher Clowdus in an attempt to provide the artistic community an outlet for the recent and ongoing discussions of marriage equality. Dr. Mason, when speaking about the piece, said “we did not look at [the piece] from the outside in, but from inside relationship, whatever form that may be, and composed from there.” It is the first known musical piece to undertake this emotional and often divisive subject. The goal of the composers and director is not to further that division, but by choosing texts and composing music in an engaging and thought-provoking way, to foster dialogue and communication. Dr. Hindman said that, “the purpose of art is to reflect society; that [society] must be revisited through a new lens with a new perspective, and that lens is art.”

The text of the first movement, Kyrie, is a paraphrase of John Boswell’s translation (Same-Sex Unions in Premodern Europe, Villard Books, 1994) of the Office of Same-Sex Union from Grottaferrata (tenth century Greek) published by Gaetano Passarelli, in L’Eucologio Crytense (Thessalonika, 1982). It is an excerpt from the marriage rites of same-sex couples in the ancient world. To parallel the traditional compositional technique of threes in a Kyrie (Kyrie eleison, Christe eleison, Kyrie eleison and the idea of the Holy Trinity), Dr. Mason has taken three lines of text to be used as the three main sections of this movement. The text asks, implores, and even begs blessings for the couple. Each section has short and clipped rhythmic notes followed by contrasting longer and more connective notes. To further that parallel of three, the longer connective portions of the movement have a voice part with quarter notes (wherein the chant is found), a voice part with half notes, and one with whole notes. The piece begins relatively low in the range for each voice part moves higher through each section. The movement ends high in the register to provoke the pleading nature of the text in gaining blessing from on high.

Gloria, the second movement, is taken from the conclusion of Gertrude Stein’s Ada (1910), the first portrait of Alice Toklas, her long-time companion and partner. It is not only a praise of Alice, but also a praise of Stein’s mutually beneficial relationship with Alice; which falls in line with the text of the traditional Gloria, which is a praise and affirmation of God. The piece is composed in an antiphonal style (one voice part singing and another voice part responding). To mirror the stream of consciousness writing style of Stein, Dr. Mason uses the second tenors and baritones in a conversation with very short portions of the text with support in the background from the organ. As they are in dialogue throughout the piece, subtle harmonic, rhythmic, and dynamic changes are employed to echo the fluid and delicate changes of the text. The first tenors enter with long soaring lines echoed antiphonally in conversation with the basses, again with the support of and in dialogue with the organ. The antiphonal nature of the music reflects the importance and beauty of listening and communication as a fundamental ingredient of a loving relationship. The movement concludes with quick repetitions of the word “living” in all voice parts and a short organ postlude to allow the performers to return to their original positions.

I believe in you my soul, the other I am must not abase itself to you,
And you must not be abased to the other.
Loafe with me on the grass, loose the stop from your throat,
Not words, not music or rhyme I want,… not even the best,
Only the lull I like, the hum of your valved voice.

I mind how once we lay such a transparent summer morning,
How you settled your head athwart my hips, and gently turned over upon me,
And parted the shirt from my bosom bone, and plunged your tongue to my bare-stripped heart,
And reached till you felt my beard, and reached till you held my feet.

The Credo, composed by Dr. Hindman, is set to text by Walt Whitman in Song of Myself from Leaves of Grass (1855). The Credo is the “I believe” statement in the mass, outlining the basic and fundamental tenets of the faith of the believers. The text by Whitman also begins with “I believe.” The work has three main sections that follow the three portions of the poem as identified by the composer. The beginning is chant like and focuses on the internal “self.” Beginning with a solo voice echoed by the choir, the choir then takes up the affirmation of the soul and “self.” The middle section begins with delicate rhythmic interplay between the voice parts and building harmonic complexity while one voice soars out over the others with the melody and loving words of Whitman’s poem. As the pinnacle of this section mounts, the voices and organ build. Solo voices then take the most erotic portions of the text and are rejoined by the choir to build to the climax of the piece to show the earthly nature of love. The final portion of the piece echoes the chant-like beginning section. The text beautifully describes how the “self” of the beginning of the piece is the internal affirmation of God in each of us and in relationship to others. Dr. Hindman describes each section of the composition as a representation of a part of the Holy Trinity. The first section, God, the Father; internal, conversational, and foundational. The second section, God, the Son; the physical/erotic aspect of love, powerful, outward flowing. The final section, God, the Holy Spirit; ethereal, delicate, and affirmational.

To my Dear and Loving Husband
Anne Bradstreet, 1678

If ever two were one, then surely we.
Of ever man were loved by wife, then thee;
If ever wife was happy in a man,
Compare with me, ye women, if you can.
I prize thy love more than whole mines of gold
Or all the riches that the East doth hold.
My love is such that rivers cannot quench,
Nor ought but love from thee, give recompense.
Thy love is such I can no way repay,
The heavens reward thee manifold, I pray,
Then while we live, in love let’s so persevere
That when we live no more, we may live ever.

The fourth movement, Sanctus, uses a poem of Anne Bradstreet (ca. 1612-1672) entitled “To My Dear and Loving Husband.” Dr. Mason uses sections of short rhythmic note values contrasted with longer more sustained notes to denote each rhyming couplet in the poem. The poem affirms the love of a woman for her husband and boasts of his greatness much as the traditional Sanctus texts affirms and boasts of the glory of God. The first climax of the piece on the text, “My love is such that rivers cannot quench,” is followed by a very intimate and quiet section that builds by waves of dynamics and phrases that propel the voices higher and higher until only a single voice part quietly remains on the word “ever.”

Bearded Callistratus has married Afer the rough
As any maiden takes lawfully a husband.
The torches shone, the bride’s veil was worn
Nor were the vows to you, god of marriage, omitted.
Even the dowry was set.
Why not yet to you, Rome, does this seem good enough?

The final movement, Agnus Dei, is the only unaccompanied movement of the work. The text is taken from Martial, Epigrams. Book 12, and deals with the marriage of two men in the empire of ancient Rome. This movement alternates between homophonic and heterophonic sections, stating the text simply and without adornment.  Dr. Hindman’s use of dynamic changes within the voice line brings out a particular part when they should be heard in the texture. Subtle harmonic changes from section to section build dramatic tension as the piece soars to ask the question “Why not yet, to you, Rome, does this seem good enough?” The movement and entire piece end quietly and introspectively with this question. It begs the listener to think about all that has come before and strive to answer this unanswered question.  ~Nathan D. Fuhrman