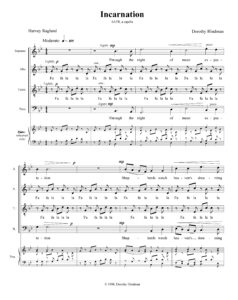 Program Notes:
Incarnation was written in the summer of 1998 on a text by Harvey Ragland.  Harvey had already written the text for my previous anthem Resurrection, and gave me the text of Incarnation as a Mother’s Day 1998 gift, as I was expecting my first child then.  As Harvey had intended Incarnation to be a suitable text for a Mother’s Day anthem, he focused on imagery suggesting childbirth, the experience for Mary, and the human aspects of Christ’s incarnation.  I found the text to be a compelling new image of the Christmas story and chose to set it as a carol instead of Mother’s Day anthem, although it is suitable for both.
~DH

Through the night of mean expectation
Shepherds watch heaven’s dreaming eyes,
Faintly cries the first fruits of creation,
And the Word explodes the sky.

From the dark in fear of knowing
the light of Love freely bleeds,
A mother’s arms gently holding
A simple faith’s most precious seed.

In the shadows despis’d and forgotten
Find a stable rude and spare
Where wrapp’d in weakness the Only Begotten
Takes a sinning world’s honest share.