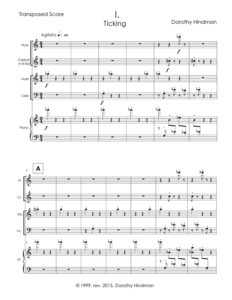 Program Notes: Setting Century is a suite of three movements for chamber ensemble written in the summer of 1999, just before and after my father’s death from complications after surgery for lung cancer.  It explores different musical and psychological treatments of time and emotion.  Ticking is agitato, with melodic fragments of varying emotional content interrupting a steady, relentless ticking.  Tolling features a lyrical melody in the strings punctuated by independently tolling piano chords and steady breathing in the winds.  Streaming features the ensemble in syncopated unison which phases into close canons and back to unison throughout.  Setting Century was made possible in part by an individual artist fellowship from the Alabama State Council on the Arts, and is dedicated to the memory of William Murphy Hindman.